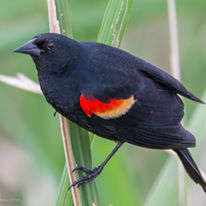 A Message From The Park:

If you come to the park over the next few weeks you may hear the noise of airboats out in the wet cells. The airboats come annually (from Louisiana) to push down the vegetation in the wet cells. This occurs to deter the Red-winged Blackbirds from roosting in the vegetation over night and then flying out in the morning, and again in at night, directly across the flight path of the airplanes coming into and going out of Augusta Regional Airport.

Read More about the Phinizy Red-wing Blackbirds below

The Red-winged Blackbird (Agelaius phoeniceus), one of the most abundant land birds in North America, is a member of the troupial family—named for their habit of gathering in large flocks—or troupes. They can be found in wetlands from the Atlantic to the Pacific.

While the genus name Agelaius means “belonging to a flock,” the species name phoeniceus and common name refer to the distinctive coloring seen on the adult males, which are mainly black with red shoulder patches, or “epaulets”. This coloring can be seen when the bird is flying or displaying. A pale yellow wingbar is also visible on perching males. Females, which are slightly smaller than the males, are mottled brownish with a sharp, pointed bill. Immature birds typically resemble females.

Red-winged blackbirds feed mainly on plant materials, including seeds from weeds and waste grain such as corn and rice. About a quarter of their diet consists of insects, such as dragonflies, damselflies, butterflies, moths, and flies, but they also consume snails, frogs, eggs, carrion, worms, spiders, and mollusks.

During summer months, red-winged blackbirds roost in small flocks. In winter, they form huge congregations of several million birds, which flock together to roost in the evening and disperse each morning.

The History of Red-Winged Blackbirds in Phinizy Swamp

Red-winged Blackbirds have used the nearly 7000 acres Phinizy Swamp and surrounding Savannah River floodplain for hundreds of years. These wetlands provide excellent habitat for roosting, breeding, and foraging. In winter months, millions of blackbirds have been known to use these wetlands. Twice daily the skies are filled with blackbirds as they disband in the morning for daily foraging and return in the late afternoon for roosting.

From November through March these large flocks of blackbirds have caused concern for Augusta Regional Airport, located directly adjacent to Phinizy Swamp. As birds create a flight risk to the planes, several accommodations have been made to keep passengers and crew safe. No plane activity is allowed for 20 minutes during dawn and 20 minutes during dusk, around the time that the birds usually fly over the airport. Although this approach is effective, it’s also too passive to change the behavior of the birds.

The Constructed Wetlands and Red-winged Blackbirds

Construction of the man-made wetlands, housed within Phinizy Swamp Nature Park, began in 1996. These wetlands were built SOLELY as the tertiary treatment for Augusta’s wastewater. As the constructed wetlands became established red-winged blackbirds, as well as many other birds and animals, discovered the wetlands as wonderful habitats and moved in. Even though the birds were in the area long before the constructed wetlands were built, their use of the wetlands has created a liability for Richmond County.

In recent years there have been attempts to discourage red-winged blackbirds from roosting in the vegetation in the constructed wetlands. These attempts include plowing down the vegetation in several wetland cells with airboats and burning the vegetation (which proved unsuccessful as the burning windows were too narrow and the fires extinguished quickly).

In December 2008, the marshy grasses of every wetland cell were flattened with airboats. Noise-making devices were placed in the constructed wetlands in an attempt to scare off the blackbirds and discourage them from returning. The noisemaking devices are set to go off in the morning and late afternoon/evening, during the red-winged blackbirds normal flight patterns.

Most of the airports around the world are located near wetlands—which we know are important habitats for migrating birds as well as other wildlife. What responsibility do we share for the flight-interruption dilemma and what is the best solution?