The Healing Power of Forests 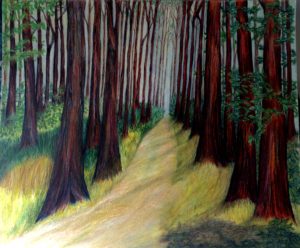 Dr. Dick Dunlop, a retired internist turned plein air painter, flagged me down on the way into the park the other day.  He was excited to share an article that he recently read in Time Magazine, called The Healing Power of Nature (July 25, 2016 issue).  Dr. Dunlap and I have talked a lot about science and about nature over the past few years but this was the first time we were able to really connect the two topics.  While there have been many studies showing the healing power of nature, such as the study in the 1980s that showed surgery patients recovered quicker if given a room with a window view of nature as opposed to a window view of a brick wall (Ulrich, 1984), or another that showed mood and self esteem were more improved by weekly walks through the countryside and urban parks versus weekly trips to a social club swimming pool (Barton et al., 2012), this article pointed to a potential underlying reason why.

A group of those tree-derived volatile organic compounds, generally known as phytoncides, have been shown to have anti-bacterial, anti-fungal, and anti-viral properties and help trees protect themselves against bacterial, fungal, and viral threats ( Li, 2008).  In essence, a tree protects itself by making its own “insect repellent” which it “sprays” throughout the forest.  As we walk through the forest, we inhale those chemicals too.  Over the past two decades, there has been an increase in scientific evidence that phytoncides have considerable health benefits to humans as well.

Phytoncides have been shown to decrease the amount of stress hormones in humans giving people an overall calming effect after walking through a forest.  Furthermore, protective cells within the human body, that are important for our own defense against viruses, bacteria and tumor cells, have been shown to increase in numbers and activity within the body as a result of phytoncides (Li, 2009).  It was found that the effects on protective cells lasted up to 30 days after a walk through the forest.  When compared to an equivalent walk through the city, they found there was no response on the numbers or activity of the same protective cells, in fact, the city air was found to be completely devoid of phytoncides!!

As a result of over nearly 4 decades of research showing the positive health  effects of walking through the woods, Japanese researchers have coined the term “forest bathing”, or shinrin-yoku, for the therapeutic practice of spending time in the woods.  What is really going on is that the trees are breathing life back into us, literally.

Given the positive benefits of phytoncides on human health and that a stroll through the woods at Phinizy Swamp Nature Park is free, our new saying at the park is, “A stroll a day will keep the doctor away”.  Please take the challenge of trying it out for yourself for the next month; let us know if you feel better as a result.