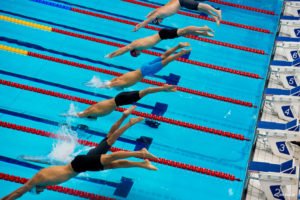 Many of us have marveled at the swimming dominance of Team USA’s Katie Ledecky and Michael Phelps during the 2016 Olympics in Rio this Summer. They’re combined nine gold and two silver medals between them is a monumental feat. While watching, though, I realized that I didn’t know that much about the pools that they compete in.

It turns out that Olympic swimming pools have some pretty specific dimensions. They are 50 meters long, 25 meters wide, and 2 meters deep. In terms of volume, when full, these pools hold 2.5 million liters of water or about 660,000 gallons. If you used a normal garden hose to fill one of these pools, it would take roughly 19 days to get it full.

Since we do a lot of research on rivers and their flow rates, I got curious about how the amount of water flowing down the Savannah River compares. At the time I am writing this, the current flow rate in the Savannah River is 4,130 cubic feet per second, which equals roughly 31,000 gallons per second. That’s enough water to fill an Olympic swimming pool in just 21 seconds! In fact, at this flow rate, the Savannah River could fill 172 of these pools in just one day! That many pools would occupy the same surface area as 40 football fields and, when put end to end, would span a distance of over five miles.