“Always the river runs beneath our thoughts …” 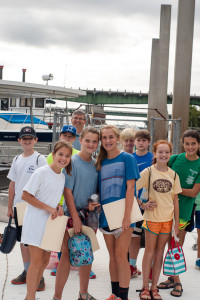 As part of the Marketing and Development Team, my job is usually in the office. However, today was different – I was getting to go on a field trip, and I was excited! I arrived at the marina, and soon I was surrounded by 7th graders. They were divided into groups, given journals and an introduction, and we were off to the boat. 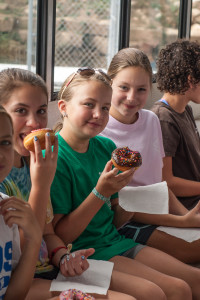 Before getting started, there was an extra special treat waiting for them. Phinizy volunteer Larry had bought them donuts. (It seems that growing young people are also hungry young people!) And soon we were cruising along the river, enjoying the scenery and observing the water and land around us. Some of the students even got a chance to steer the boat.

But this was not just a cruise. This was an experience: a way to learn hands-on about the world around us; a way to monitor the health of the river in ways similar to our research team; a way to be part of the life of the river itself. And while floating down the river, the groups rotated between four different hands-on activities created and lead by Phinizy staff that helped them to learn about the health of the water and about how to be real student scientists. 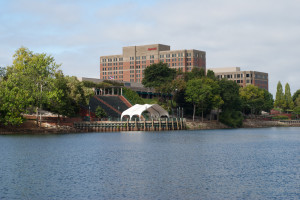 High tech. A huge part of learning about the quality of the water is in taking measurements with a sonde, a method our research team uses to track the health of the Savannah and Ogeechee Rivers. I watched as a 7th grader lowered the machinery into the water, and the live data began to stream across the screen. Not only did they record data such as dissolved oxygen, temperature, percent saturation, they learned how each of these factors indicates how healthy the river is at any given point. And in places that conditions were less favorable, they were able to look at what was happening in the areas around them that might be making a difference. They were beginning to think like research scientists already!

Playing with bugs. Biological diversity, or the variety of plant and animal life, also tells us a lot about the health of our water. For instance, some animals are very sensitive to harmful chemicals, temperature variations, and other influencing factors. And what better way to find out about this than by having a look at bugs pulled from the water that morning under a microscope. The students were able to identify what type of bug or macroinvertebrate they had and then to note how sensitive it was to its surroundings before placing it back into the water.

Closer to the water. For this special trip, two of our research scientists joined in, taking the groups in smaller boats on the water. They were able to ride closer to shore and to see more of their surroundings. As they took their turn in the smaller boats, they made observations about what was around them and learned to assess the health of the river based on what they observed.

Journaling. Throughout the day, each student wrote down their expectations, their thoughts, and what they were experiencing. They drew vibrant and creative pictures to express these thoughts. And in the journaling segment, they had the opportunity to put everything into words. They were challenged to write a poem that would follow this quote that Eugene Edmund Murphey penned in a poem called Always the River: “Always the river runs beneath our thoughts …”And they did it spectacularly. From those who used fluid language to describe the river’s feelings to those who rapped about how the river made them shiver in their livers, it was clear that they were making a connection to the river and the lifeblood that it provides for our community.

Making a Difference. Throughout the day, I listened to students answer questions and share their thoughts. It was clear that they were bright and that their teachers have been doing a great job teaching them. They already knew that we all rely on the river for the water we need for drinking, for food and for fun, and that the health of the river has an effect on us all. It was also clear that this opportunity made an impact. They all came with expectations, excitement, and nervousness. They left with something even greater – they had become part of the life of the river. They were able to spend a day on the river as scientists, learning and seeing first-hand how the river is always moving, changing and living. Perhaps one of the students in this group will grow up to be a water research scientist, helping us to understand the water and inspiring needed changes. But even if not, this group will grow up understanding why the river and its health makes a difference to us all.

“Always the river runs beneath our thoughts…” And when it does, when it becomes part of the fabric of our minds, we gain a new respect for what surrounds us and for the part we have to play in the life of the river.