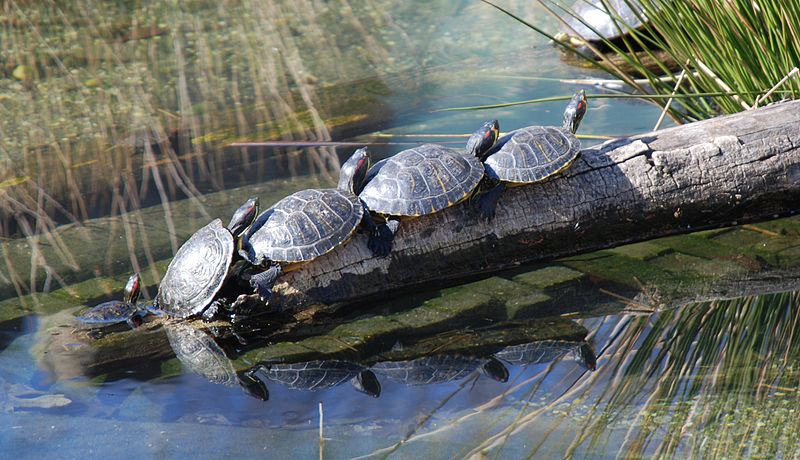 If you’ve spotted a group of turtles basking in the swamp at Phinizy, chances are pretty high that they were pond sliders. Pond sliders are the most common species of turtle at the Nature Park, and are very common throughout the Southeast in general. They are found in all aquatic habitats throughout the Park, and can frequently be seen from the Floodplain Boardwalk basking on stumps or logs.

Pond sliders have yellow bands on the carapace (upper half of shell), most commonly in younger specimens. Many individuals darken with age, obscuring markings on the skin and shell. The plastron (lower half of shell) is yellow with black markings around the edges. Males have long claws that are used to grip the female during mating.

The release of red-eared sliders outside of their native range is highly discouraged. They have been found to outcompete other species, including our native yellowbelly sliders, for food, basking areas, and other resources. Research also suggests that these two subspecies have mated in the wild, further complicating the issue.

Sliders are less conspicuous this time of year, as cold temperatures force these ectotherms to seek refuge in the mud or underneath stream banks. They often come out of hiding to bask when temperatures rise, and go back once it gets cold again. Occasional, brief warm periods in the middle of winter are fairly common in Georgia. On the next sunny, [relatively] warm day, you’re likely to spot pond sliders basking throughout the swamp.