Figure 1: Area of Pendleton King Park classified as a wetland.

Wrong! Soil is so much more than what people typically think. It is the basis for sustaining life on earth by supporting food and biomass production, regulating water quality, storing carbon and maintaining the balance of gases in the air, providing habitats, and sustaining biodiversity. The quality of soil is an important factor in the quality of the ecosystem. Its texture, water-holding capacity, porosity, permeability and organic matter content all affect the surrounding ecosystem.

Wetland soils, are formed under conditions of saturation – when flooding or ponding lasts long enough to cause anaerobic, or oxygen-poor, conditions in the upper soil layer. Wetlands themselves have three defining characteristics: (1) the presence of standing water, either seasonally or permanently, (2), unique wetland (hydric) soil, and (3) vegetation tolerant of saturation. 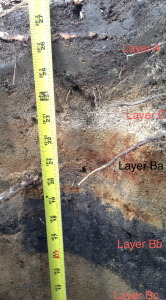 So, if a wetland soil must have wetland plants, water, and anaerobic conditions, why was a section of the soil at Pendleton King Park in Augusta, GA regarded as a wetland based on the U.S. Army Core of Engineers’ parameters when it looks like a pine forest (Figure 1)?

Looking at the soil from Pendleton King Park, it is technically a wetland. Oddly, the soil does have hydric properties. The soil has a gray color from a process known as gleying. When soil is wet for an extended period of time, anaerobic conditions will result because oxygen diffusion through the soil is extremely slow. There is only a thin surface layer that will support normal aerobic, or oxygen loving, root respiration and the deeper layers remain reduced. Reduction is a chemical process where electrons or hydrogen ions are gained and an oxygen molecule is given up. Nitrogen, manganese, iron, sulfur, and carbon are all reduced in a wetland environment. Iron reduction was seen in the orange mottles, or speckles, in the layer labeled Ba in Figure 2. Mottles that are orange/reddish-brown are from the reduction of iron, and mottles that are dark red or black are from the reduction of manganese (observed in the layer labeled Bc in Figure 2). The reduction of manganese can also be observed in the thick black layer, layer Bb in Figure 3. Another observation that the research team noticed was a rotten egg odor at about a 2.5 ft depth. This odor is only observed when sulfate is being reduced. These chemical processes are necessary for the break down of nutrients so the plants can use them to grow.

If the soil was classified as wetland, then why were there pine trees growing in it? One theory is that the area was a forest next to a natural wetland, but during Augusta’s development the natural hydrology changed. A railroad and a paved road were both built alongside this wetland seen in Figure 3. The railroad and the road were both built up several feet on a berm. During high periods of rainfall, these features kept the water from running off naturally. The water had nowhere to go, so it just sat for long periods of time. Perhaps if the conditions stayed the same for another 50-100 years, all of the pine trees would die because they wouldn’t be able to transport oxygen, and water-loving plants, like cattails and water lilies, would move in. The pine trees would not survive because, unlike the water loving plants, they do not have the aerenchyma, or air spaces, in their roots to allow the plants to get oxygen. Other plants like reeds, and sedges have hollow stems to transport oxygen.

So to answer the question “Is dirt just dirt?” No! It is the basis to sustain life and can be used to predict changes in the environment. It influences the distribution of plant and animal species and provides nutrients for those animals. It is important to understand the aspects of soil in order to understand how the ecosystem around it will function.