A leech is a common invertebrate closely related to the earthworm. Leeches are known for parasitizing vertebrates by sucking their blood. Here in the swamp, leeches are found in many of the bodies of water. The Smooth Turtle Leech (Placobdella parasitica) is one species that routinely occurs in the southeast. Though this is an aquatic leech, it doesn’t swim very well and actually spends most of its time either on the bottom or on the bodies of turtles. These turtles incidentally supply these leeches with a source of food through their blood and protection from the water and predators like fish which commonly eat these leeches. 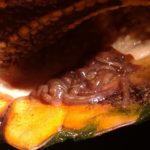 A brief study conducted at Phinizy showed that nearly two thirds of the turtles caught had leeches on them. The turtles that were hosting the leeches included the Yellow-Bellied slider (Trachemys scripta scripta), common snapping turtle (Chelydra serpentina) and musk turtles (Sternotherus odoratus). Two of the turtles we surveyed, a Yellow-bellied slider and a snapping turtle, had over one hundred leeches each on them.

During this study, we also started a turtle marking system. To mark the turtles, we took a metal file and created notches in specific areas of the turtle’s shell. This doesn’t hurt the turtles and it allows us to permanently mark them so we will know if we catch them again in the future.