There has been a lot of discussion recently about the Savannah River’s designation as the 3rd most polluted river in the U.S. We had a chance to provide our thoughts on the topic in a series of reports by WJBF’s meteorologist Jason Nappi (view these here) and through an article in the Augusta Chronicle (http://chronicle.augusta.com/latest-news/2014-06-27/report-ranking-savannah-river-third-most-toxic-america-questioned-scientist). However, the dirt we are talking about here has nothing to do with nitrate discharge but has to do with, well, real dirt—the mud, soil, sediment kind of dirt. 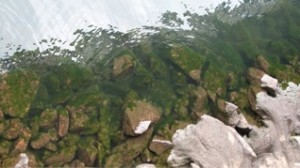 The reason that you would be able to see the disk so far into the water below Thurmond Lake is because the dam and lake prohibit the transport of material (sediment, leaves, nutrients, etc.) that originates from the landscape upstream of the lake, to the river below the dam. In essence, the lake is a big deep puddle that traps most of that material. As a result, the water that gets pumped through the dam is “filtered” by the lake. Removal of that material is the reason you can see 11 feet into the water below the dam.

The reason you can only see the white disk about 3.5 feet into the water near Clyo, GA is not because of Augusta but because the river begins to flow through what is known as the Coastal Plain Physiographic Province. A physiographic province is a region of the world that is distinct from other regions in terms of rock types, the landscape, and the environment that results from the topography and climate in that region. The Coastal Plain Physiographic Province is the region that is characterized by “rocks” that do not stick together (unconsolidated) like gravel, sand, silt, and clay, is generally flat (the Savannah River flows 187 miles from Augusta to the ocean but only falls 100 feet over that distance), and is generally wet with large areas of rivers, marshes, and swamplands. The Coastal Plain begins in Augusta and extends toward the sea.   As the Savannah River flows through the Coastal Plain, it comes into contact with more and more “unconsolidated rocks” and carries them to the sea. In addition, the climate within the Coastal Plain is perfect for growing trees that drop lots of leaves, some of which stain the water a dark tea color as they decay. As the water runs off the land, through the sediment, and ending up in the river, it carries with it stained water and leaf material to grow more bugs and river fish. The additional sediment, leaf material, and natural stain, compared to the Thurmond Dam site, no longer allows as much light to pass through the water which is why you would only be able to see the white disk to about 3.5 feet. The attached figure shows how deep you can see a black and white colored disk (Secchi disk) at several locations along the river.

If you would like to know more about our research efforts on the Savannah River please feel free to read our final report from a comprehensive Savannah River study or our annual monitoring reports (https://phinizycenter.org/projects/river-monitoring/)